Microsoft and Sony had been fighting against the hack of their gaming services by Lizard Squad but failed to resolve the issue. Surprisingly Kim Dotcom, the owner of MegaUpload stopped the outage in quite an astonishing way. Let me give you a brief introduction about Kim Dotcom. He is the present owner of MegaUpload and is still fighting against allegation of for conspiracy to commit racketeering and criminal copyright infringement. 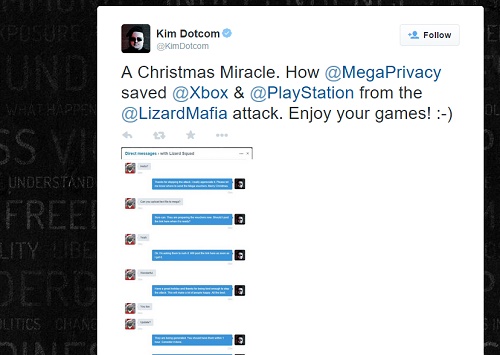 Kim Dotcom literally adumbrated a bait of its newly launched cloud service Mega. The hackers were offered Pro1 annual Mega vouchers with 500GB of storage in exchange of leaving Xbox Live and the PlayStation Network alone. The offered seemed lucrative to the Lizard Mafia who immediately agreed to leave the PlayStation and Xbox services. the conditioned mentioned that as long as they remain loyal to this agreement, the respective Mega accounts would be converted to lifetime accounts. The accounts will be terminated as soon as they disobey the conditions.