When an astronaut leaves for his journey through space, do we even wonder what he has to undergo? How his body and mind responses to the enormity of space, the new environment and the melancholy of travelling away from mother earth? Probably we have never thought of how they sleep, eat, dispose their waste faeces etc. In this article I will share with you some fascinating facts which have been given by NASA. The image below is a graphical image given by NASA which contains sufficient information to let you know how astronaut Scott Kelly’s body will response in space? 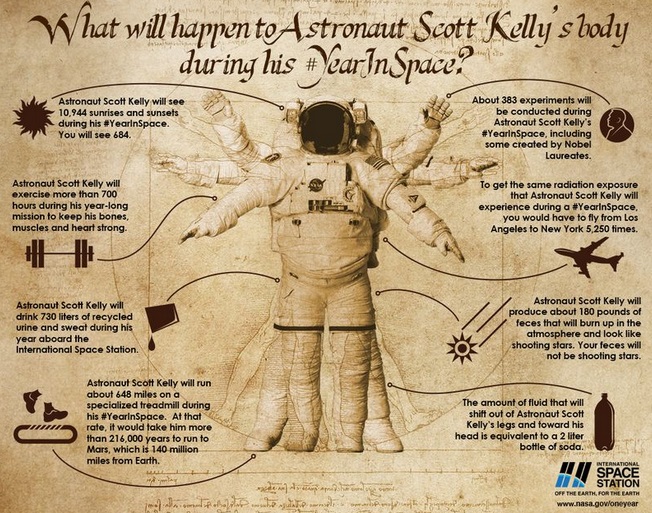 NASA and ISS have been jointly working on a project to experiment with the long term interactions of spacelight with human body. The results based on the experiments will help scientists in the final journey to Mars which is scheduled to 2030. So Scott Kelly and Mikhail Kornienko are both assigned a project which will require them to stay in space for a full year on the station. The mission in which Scott Kelly is joining is called One Year Mission.

Kelly and Mikhail were launched into space in march 2015 for the One Year Mission at the International Space Station. This will be a historic trip for the astronaut and cosmonaut who will be staying in space for the longest period of time- that is one year. Within this span, they will study the effect of space radiations of human body. Some of the main issues that human body will encounter are muscle weakness, lack of immunity, trouble in bones, circulatory systems etc. Even though astronauts are given thorough training, but the muscles tend to become weak day by day in space. While on earth, human beings have to counter earth strong gravity which strengthens its body and leg muscles. In space, since the gravity is zero, prolonged inactivity of muscles cause severe problem to astronauts. So they have to perform cardio exercise on treadmills, leg press, bench press, pulls etc. Th decreased immunity has been discovered lately and the exact reason behind this immune system dysregulation is not yet uncovered to scientists.

Apart from physical disorder, mental stress is a big factor. Prolonged melancholy, detachment from family and the habitable environment, lack of sleep adds to the peril of immune system. Astronauts often survive on sedatives and sleeping pills in order for a stress free sleep. So situation is worse than we can ever imagine! For more details read the infographic image given above.