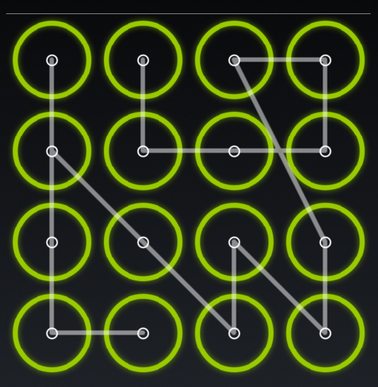 The study was carried out by Marte Løge, a graduate from the Norweigan University of Science and Technology. Løge told that his study unveiled some typical human nature that compells users to draw similar lock patterns. A good fraction, 77 percent of users start drawing their patterns in one of the four corners, while 44 percent draw their pattern in the top-left corner of the screen. Marte said that their study involved 4000 screen lock patterns and found that average number of users only utilize 5 out of the 9 nodes. So even if the phone has made provisions for 140,704 combinations, normal users utilize only 7152 combinations instead.

“Humans are predictable. We’re seeing the same aspects used when creating a pattern locks [as are used in] pin codes and alphanumeric passwords.”

The researcher also told that they are working hard to bring out potential solutions asap. But he advised users to utilize all the 9 nodes of the patterns, turn off the “make patterns visible” options in order to prevent the phone saftey from attackers.