Cancer being the most dangerous life-threatening disease and its treatment has always been challenging for the doctors. Cancer can be detected and depending on the nature it can be surgically operated. But the malignant tumors can occur again periodically or repeatedly. Chemo-therapy and radiations are given post-surgery to prevent the cancerous growth but it has got some adverse side effects. The gold nanotubes have brought a new ray of hope for the treatment of cancer cells with minimal toxicity to patients. 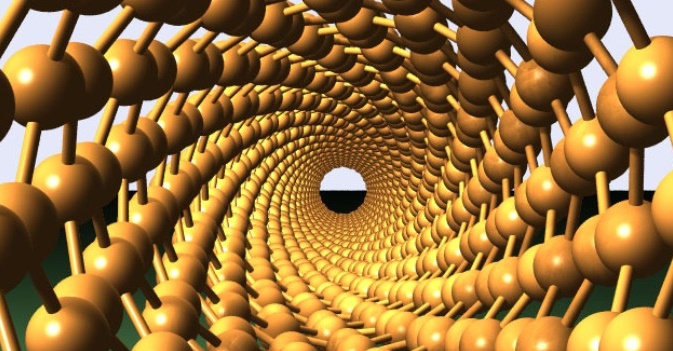 The journal Advanced Functional Materials has published the first successful demonstration of the biomedical use of gold nanotubes. The scientists have tried this approach in a mouse model of human cancer. Researchers at the University of Leeds have successfully tested the gold nanotubes and have shown that gold nanotubes have many applications in fighting cancer; internal nanoprobes have high-resolution imaging and photo thermal conversion agents. Gold nanotubes are agent for detecting cancer cell and can be used as drug delivery vehicles.
Study lead author Dr Sunjie Ye, who is based in both the School of Physics and Astronomy and the Leeds Institute for Biomedical and Clinical Sciences at the University of Leeds, said: “High recurrence rates of tumors after surgical removal remain a formidable challenge in cancer therapy. Chemo- or radiotherapy is often given following surgery to prevent this, but these treatments cause serious side effects. Gold nanotubes — that is, gold nanoparticles with tubular structures that resemble tiny drinking straws — have the potential to enhance the efficacy of these conventional treatments by integrating diagnosis and therapy in one single system.”
The scientists explain the new technique to control the length of the nanotubes. By controlling the length they were able to produce gold nanotubes. When these gold nanotubes travel through the body with right dimension and right light of the frequency is shone, they can absorb a type of light called ‘near infrared’ within the ‘optical window’ of biological tissue. These ‘near infrared’ light energy is converted to heat and render human skin transparent. Only need to zap with lasers of varying brightness to achieve multiple ends. By adjusting the brightness of the laser pulse it can be decided whether to destruct the cancerous cell or just to detect the tumors. For eg, relatively low brightness is used to image the tumor while the high brightness heat the tubes and helps to destroy the affected cells. The other good aspect of the gold nanotubes is that it can deliver medicine at the same time. The shape has a central ‘hollow’ core that can be loaded with a therapeutic payload and can be used as drug delivery vehicle. The researchers use a new type of imaging technique to spot the gold nanotubes in the body. This imaging technique is known as ‘Multispectral Optoacoustic Tomography (MSOT)’. It helped to detect the gold nanotubes in mice which had been injected intravenously.
It is the first biomedical application of gold nanotubes within a living organism. The use of gold nanotubes in imaging and other biomedical applications is currently progressing through trial stages towards early clinical studies. We have to wait a while before it is ready for hospital uses. It would really been a sign of relief for doctors and cancer affected patients that it enters and leaves the body without causing any toxicity problems. Now we can deal cancer with some injections and laser blasts. A new hope for those fighting the deadly battle.