It seems that the new iOS 8 is already a hot favorite of developers and consumers. Within a day of launch of iOS 8, the devices working on this new Apple OS are using third party apps from App store and its interesting to find that keyboards top the charts. Most of the popular keyboard app developers have launched iOS 8 versions of their keyboards into the iOS App Store called iOS 8 keyboard apps. And just within a day of launch these apps have topped the charts of most downloaded app in both paid and free categories in U.S. and other countries. Check the list below. 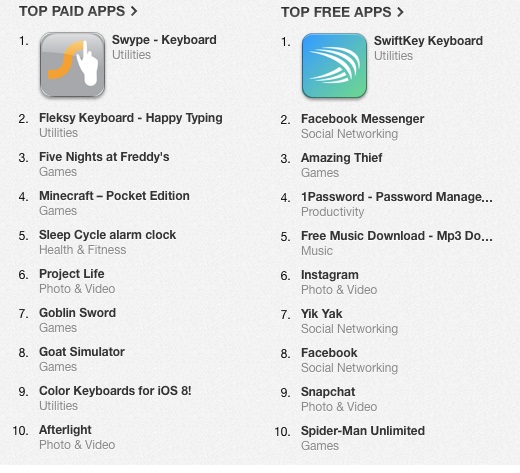 Within the first 24 hours of their launch, paid keyboards Swype and Fleksy managed to make to top two spots in the U.S. paid iOS app chart, leaving back popular games such as Minecraft Pocket Edition and Five Nights at Freddy’s. On the other hand if we look into the free app chart, Swiftkey clanged to the number one position, beating the very popular password password manager and the newly launched Amazing Thief game. What is most impressive is that SwiftKey has even displaced long time number one Facebook Messenger in free app rankings.

The new keyboards are doing huge business mainly due to the fresh iOS hype and it needs some time to see where they finally settle down in the app chart in due course of time. What is interesting to see is that many of the users are trying out these alternative keyboards despite of the new improved QwickType which comes default with Apple that has smart predictive inputs.