It’s Pluto Time: When the illumination of earth matches to the noon on Pluto

Very recently NASA has confirmed the evidence of liquid water flowing through the red planet Mars. Mars has been the centre of studies for many International Space research centers and NASA have progressed hugely in exploration of Mars. NASA has posted in their official website that a high resolution imaging spectrometer on MRO have detected patches of hydrated minerals on slopes with mysterious streaks. A continuous study has shown that the water flow is in the form of darkened streaks. During warm seasons the streaks get darkened and then in cooler seasons, they fade away. They are found in several locations on Mars when temperatures are above minus 10 degrees Fahrenheit (minus 23 Celsius), and disappear at colder times. 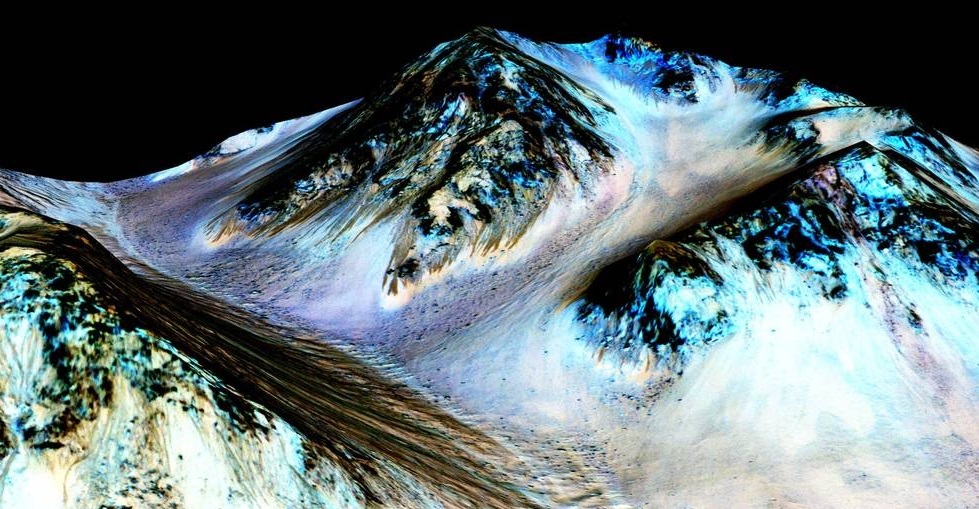 “Our quest on Mars has been to ‘follow the water,’ in our search for life in the universe, and now we have convincing science that validates what we’ve long suspected,” said John Grunsfeld, astronaut and associate administrator of NASA’s Science Mission Directorate in Washington. “This is a significant development, as it appears to confirm that water — albeit briny — is flowing today on the surface of Mars.”

Scientists have found out hydrated salts which indicated that the darkened streaks captured in spectrometer are results of hydration process. Most of the hydrated salts have been found on slopes which have helped scientists conclude that the hydration process is a major driving force behind formation of the streaks. There are many downhill found in the spectrometer imagery which have been named recurring slope lineae (RSL). Scientists have chalked out relationship between RSL and liquid water. “The spectrometer observations show signatures of hydrated salts at multiple RSL locations, but only when the dark features were relatively wide. When the researchers looked at the same locations and RSL weren’t as extensive, they detected no hydrated salt.”

Check out the video of NASA below: