Facebook and Google Chat integration with Outlook to be disconnected

BBC Panorama carried out an investigation recently on Apple factories in China where most of the iPhones are being manufactured. This investigation showed some shocking revelations which include frequent breaches in securiti services like workers’ hours, ID cards, dormitories, work meetings and details of juvenile workers. The investigation was carried out at the Pegatron factories which workers fallung asleep during their shifts. Reporters fetched news that workers were not granted week offs despite repeated requests and mose of them were working 18 days in a row. 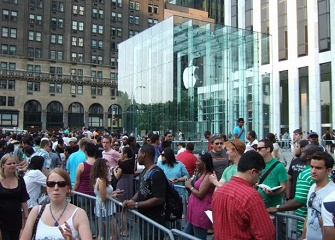 Apple strictly denied of such allegations but a reporter working 16 hours shift said,”Every time I got back to the dormitories, I wouldn’t want to move.” “Even if I was hungry I wouldn’t want to get up to eat. I just wanted to lie down and rest. I was unable to sleep at night because of the stress.” However Apple made it clear by saying,”We are aware of no other company doing as much as Apple to ensure fair and safe working conditions.” “We work with suppliers to address shortfalls, and we see continuous and significant improvement, but we know our work is never done.”

According to BBC Panorama, Apple’s work culture has left an adverse impression on humanity itself. Many poor children in Indonesia are involved in collecting tin. Twelve-year-old Rianto works with his father at the bottom of a 70-foot cliff of sand. He expressed his anxiety,”I worry about landslides. The earth slipping from up there to the bottom. It could happen.”

Some interviews with the children are directly stated here as obtained from BBC Panorama:

Johan Murod, who runs one of the smelters on Apple’s list, said 70% of the tin that is exported comes from the small-scale mines.

“At the smelter there’s everything from both large and small scale mines. It’s all mixed. There’s no way to know what is legal and what is illegal.”

Apple says it is a complex situation on Bangka with tens of thousands of miners selling tin through many middle men.

“The simplest course of action would be for Apple to unilaterally refuse any tin from Indonesian mines. That would be easy for us to do and would certainly shield us from criticism.

“But that would also be the lazy and cowardly path, since it would do nothing to improve the situation. We have chosen to stay engaged and attempt to drive changes on the ground.”