Microsoft to give away 100GB of OneDrive space for one year to 100,000 people

Tumblr is infuriated with piracy and pirates! Yes, it can be clearly said from the recent drastic steps that have been taken by Tumblr against the pirates. The blogging website id reportedly filtering all search results which has tag “Torrent” or anything related to torrent. Previously, Tumblr started blocking explicit content like material of sexuality or crime. Now, it has modified its Policy in a stringent way. The sudden reason why it became so strict in its policy is not yet known but speculation said that past few months the blogging site has been receiving complaints regarding piracy and copyright infringement from IFPI, the anti-piracy group. 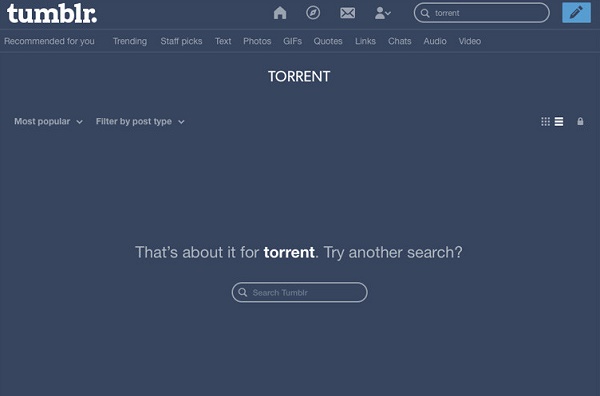 Now, Tumblr will straightaway remove explicit pirated content and contents tagged with Torrent. If you search any such item with this tag, you will find a blank page. You can get back the normal search results if you turn off the adult content filter.

The new policy that Tumblr has added in its existing set of Policies is the “strict three-strike policy”. This policy will be implemented against a user if he/she is found to infringe copyright for several times, at maximum three times. The write up or content will be checked by Digital Millennium Copyright Act. Hence, if a user is accused with repeated copyright infringement, then the account will be permanently removed along with any another existing accounts attached with it.