How to Open a Zip File Using Only Windows?

Sony is reportedly bringing the latest upgrade Android 5.0 Lollipop for its Android handsets. So definitely there is a lot of expectations from the Sony flagship Android phone owners. But today Sony’s official Twitter account revealed that Android 5.0 Lollipop update will be rolling exclusively for the Sony Xperia Z series. This will include all handsets of Xperia Z series including the Xperia Z3 Tablet compact. There has been speculation that even the handsets Sony Xperia C3, E1, E3, M2, M2 Aqua, T2 Ultra and T3 owners will have to remain content with the old Android 4.4 KitKat version. 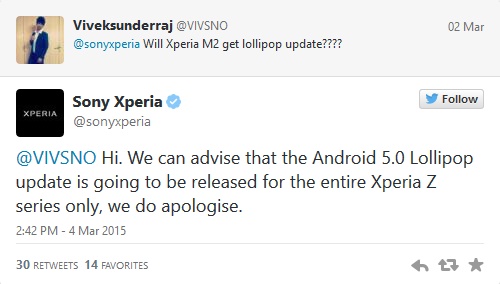 Sony expressed its plan to introduce the Lollipop update for its Android handsets back in last year. Since then there has been no update regarding which devices will be fortunate enough to receive the update. Many users have tweeted their queries to Sony Xperia asking when their non-Xperia devices will be receiving the Lollipop update. To everyone’s disappointment, Sony Xperia tweeted back that the update will be only for Xperia Z series. Even though they apologized, yet users are infuriated by this decision.

However, since there has not yet been any official confirmation and the fact that the social networking accounts have record of being wrong at times, there us still a faint ray of hope.