RNG or Random Number Generation is an algorithm used for producing random numbers. This algorithm is used in video games to determine random events. These Random events are such as your chance at landing a significant hit or getting a precious item.

Random number generation or RNG is highly being used in modern video games. Take for example PokemonGo where you get a chance to meet a unique Pokemon or Mario Kart where you get different items each time, or Diablo where you have the chance to win a cool treasure. Other games like The Binding of Issac or Minecraft, that are procedurally generated would not have existed without Random number generation. While a lot of games are dependant on RNG, a lot of games work without it too.

But here are some examples that state, even though the games are not completely dependant on RNG, a part may be focused on using RNG. Counter-Strike Global Offensive uses RNG to ascertain how bullets hit the targets, and DOTA 2 makes use of RNG in determining how often abilities will affect the opponents. The element of randomness in gameplay makes it unpredictable.

Monotony can be debarred if there is randomness. Because it takes to curiosity and involves risk and keeps the game fresh.

In the game of Tetris, each block is chosen randomly and that is what makes the game fun. Without it, the game would not have been as interesting as it is. There would be no risks or use of cleverness and it would all rather predicted.

For competitive games like Hearthstone that rely on risk-based mechanics, the skill can b compromised. Because due to use of RNg, luck favors and skill can show no work. There would be no difference between a pro and a lucky amateur. This only leads to a lot of pissed off gamers.

This might sound fun to a lot of use, but to gamers, it is not something fun. It is like adding randomness to the game of chess. Imagine the frustration. Sometimes a gamer might lose due to the RNG which went in favor of the opponent.

RNG Can Be Manipulated?

RNG is an algorithm that generates random numbers mathematically. Like an addition takes two numbers, RNG certainly takes in two or more variables to generate a random number. The question is where do games get their variable from?

They pick it from the local values, like the console’s internal clock as a variable, the number of objects on your screen, your character’s customized name, or even the sequence of buttons that you would have pressed in starting the game. and so on. There are a lot of ways to pick up variables.

In certain logics, it is easy to guess the variables such as counting the cards. Only here, it is a more difficult but not impossible case. RNg manipulation is not common in competitive gaming, but it’s a part of classic RPGs and retro video games. This happens mostly when the algorithms are less complex and more straight forward. An experienced gamer can always find his or her way towards the perfect destination.

How do you rate RNG?

Many people consider RNG as a method to keep the game fresh and interesting. This is because RNG is crucial to games like modern puzzle games, card games, and RPGs. RNG has been used to good effect in a few action and multiplayer games. RNG offers variety and keeps the game fresh every time. Every time you switch to play, there is always something new.

While we consider it as good, to competitive gamers, it might sound like a curse. Competitive gamers mostly feel that RNG undermines their skills. It becomes a lot annoying to them, no doubt. This is why games by esports community are solely based on skill-based mechanics.

RNG or Random Number Generation is essential to certain games. Without RNG it would all be just a predictable and memorizable game. There would be no fun or thrill when you start again. This, however, applies to only a few games. For other games, like that of competitive games, it might turn unjust to a few skilled players and work like a genie for the lucky ones. It is all on the game you choose. It is all on how you take RNG. 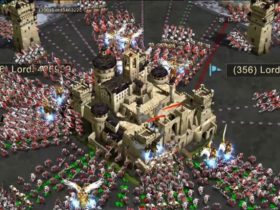 How to Play War and Order on PC ?