Yesterday (dated 29th Jan 2015); SpaceX unleashed its future plans with animated video of its new Falcon Heavy rocket. If all goes according to plan, it will be first time that eventually its gonna be possible to launch a manned spacecraft into space and then touch back down on a landing pad. Falcon Heavy, the mega-rocket of “scale and capability unequaled by any other currently flying”, is yet to undergo its first test launch, but SpaceX released an animated video of what the launch and landing could look like. 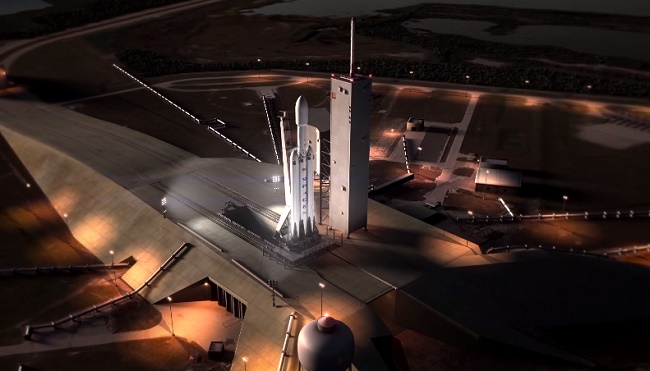 Earlier, SpaceX failed to land its Falcon 9 rocket. On its first test, the Falcon 9 rocket that was used to deliver the Dragon capsule to International Space Station failed to land back on its floating platform. Although it managed to return back to Earth, but it exploded after landing on the platform, with possible reason of failure considered was running out of hydraulic fluid used to control rocket’s stabilization fins during the descent. “Close, but no cigar,” was the tweet from SpaceX CEO Elon Musk after the test flight. Falcon Heavy launch will feature an attempt to recover the first-stage boosters once they separate from the Falcon, similar to Falcon 9 with certain modifications.

In the video published by SpaceX, all boosters return safely to Earth. It will have 3 Rocket 9 boosters, and it will be capable of lifting a payload of 53000 Kg. Each of Falcon Heavy’s boosters is equivalent to the first stage of a Falcon 9 rocket. The new Falcon rocket stands at a towering 224.4 feet (68.4 meters). It has 27 engines to power its three boosters on the first stage. For the second stage, there is another engine that will help the rocket deliver a satellite to its chosen destination. The rocket was designed to ferry humans into space, says Elon Musk according to whom, it will be one day used as manned missions to moons or mars.

SpaceX’s goal is to achieve rocket re-usability to reduce space mission costs. Intention is to create a rocket that can lift large amounts of payload into space at low cost. The end goal of the recoverable rockets is to make space travel more affordable by re-using equipment and materials across multiple flights.

According to experts, the Falcon Heavy rocket developed by SpaceX is regarded as a powerful machine that can carry a load like a commercial plane having hundreds of passengers, luggage and fuel. Elon Musk, said, “The first stage of the rocket has three Falcon 9 engine cores that are capable of generating 27 engines worth of power at liftoff. We are planning to bring a lot of improvements in the space travel and exploration industry.” He hopes to one day send people to Mars, and connect them with those on earth via satellite communication. Musk explains this project as ‘a giant global Internet service provider’. “We see it as a long-term revenue source for SpaceX to be able to fund a city on Mars”, added Musk. However, Musk admitted that SpaceX Internet service will not be formed soon.
SpaceX earlier attempt with Falcon 9 didn’t go with the expectations, hope this time around it brings a huge Space revaluation with Falcon Heavy.