Well do you remember Clippy? Well, in case you can’t recollect we tell you that Clippy was that tiny paper clip that used to slide down your computer screen whenever you were busy using Microsoft Word. It went on interrupting you with its urge to help you or might be sometimes pissed you off with its silly gestures. Facebook is making a mascot just like Clippy to assist you with their newly updated privacy tools. 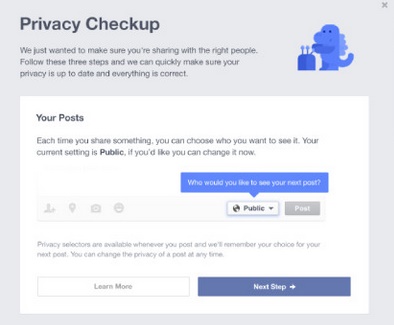 We all know that Facebook has tons of privacy settings that goes on updating every now and then. From profile pictures to cover photos, posts to updates you can change the privacy settings individually for each criterion. Whatever it is, it may seem too easy for you but for a new user, understanding the details of it becomes difficult. So is the necessity of a mascot. Till now Facebook tested several mascots, speech bubbles and robots out of which a tiny blue dinosaur is in the top of the selection list. The dinosaurs is called as Zuckasauras after the name of Mark Zuckerberg. But this is not the official name.

The mascot says, “Hi Charlie! Before you post, we wanted to make sure you’re sharing with who you want. Who would you like to see your post?” Facebook says will “review things like who they’re posting to, which apps they use, and the privacy of key pieces of information on their profile.” So it will be your all time companion of Facebook. Raylene Yung from Facebook’s privacy management group told Bits: “Our team looked at a few different characters, saw the dinosaur and just thought he was the friendliest and best choice. Once we tried him out, we saw some great results and welcomed him to the team.”