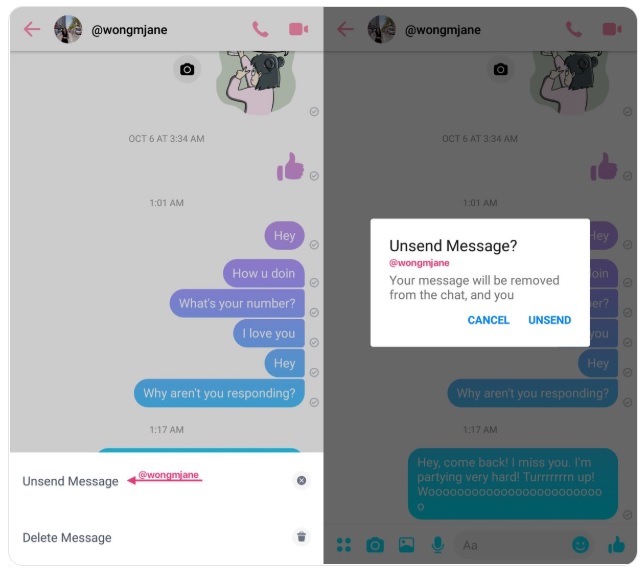 One of the most relieving features added on WhatsApp was deleting the message sent from both user ends. We were eagerly waiting as when the same will roll out for Facebook messenger. We often commit the mistake of sending wrong messages to the wrong recipients. Hence, Facebook users badly needed this feature. Just while we were missing this feature, news have come out that Facebook is testing a feature where a user can unsend a message already sent in Messenger.

Facebook has kept silence about this matter since half an year after the company was found to be deleting messages sent by Mark Zuckerberg and other executives on the messenger platform. Facebook then announced that they would try to make the feature available to users as early as possible. Now, finally the feature is being tested.

A tweet by Jane Manchun Wong, who is a tech enthusiast, says, “Facebook Messenger is finally working on “Unsend Message” in the app for everyone!” She also attached screenshots which has been attached in this article as well. The screenshot shows that there are two options for a message sent on Messenger, one is Delete and the Other one is Unsend Message. If you want to confirm unsending the message, then click Unsend or simple tap on cancel to cancel the operation.

Right now, there is no time limit set. For example, in WhatsApp you can delete a message for both user ends within a time span of 7 minutes. After that, it cannot be deleted from the recipient’s side. So, according to tech enthusiasts, Facebook might add a time stamp soon in the future.