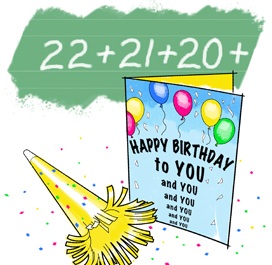 What ‘the birthday paradox’ works on?

Smartphones brought a new era of connectivity and its contribution on human life is inevitable. But its influence on private and social life has taken a toll too. We can’t imagine our lives without smartphones and unknowingly we are disconnecting from our loved ones to connect with outer world. Not only that researches say people who make use of smartphones through out the day has less sexual behavior compared to the ones who doesn’t. Apparently it may not appear to be alarming but in the long run it is.

There is some shocking results that have been received from survey. People prefer smartphone than having an active sex life? Shocking but true. 1 out of 10 persons find it okay to text while having sex and 3 out of 10 smartphone users engage in taking videos and photographs of their intimate moments and in the process they ruin the sex. One third of Americans who gave the survey said that they can live without sex but not Facebook, BBM and their smartphones. The list of such trapped humans is topped by iPhone users scoring a sad 28 per cent votes, then lead by Android with 23 per cent and 18 per cent Blackberry users. Besides this, the most dominant reason of conjugal trouble starts due to career ambition followed by excessive uses of gadgets as the leisure time leaving no room to have your lover in your arms. Moreover one partner of every couple who became the victim of ignorance agreed that the retarded emotional and sexual behavior of their partners made them more suspicious and doubtful about their relationships.

You may be wondering why suddenly such a post like this here? The reason is although we are charmed by technology but we are not against the natural process of life. Apart from all the psychological effects, smartphones have adverse effects on body as well.

Let me shock you a bit more. In 2011, a research project in China diagnosed a new disorder in human behavior known as “Internet Addiction Disorder”. Individuals affected by this tend to be addicted to gadgets and smartphones and their excitement on bagging a new gadget and equal anxiety or frustration on not having a new smartphone after a definite time or after 1 month from the official date of launch of that device shows similar behavior like a person addicted to cigarette, alcohol and others. This is effect of “dopamine” a chemical messenger released from brain and it gives you intense happiness on getting your desired phone and the euphoria increases your desire t search and search and more search. The IAD is more adversely effective for smartphone users because it is handy and portable. So guys if you are having this, it’s time to rectify.

Another scenario: In a recent study of 1,600 managers and professionals by Leslie Perlow, PhD, the Konosuke Matsushita professor of leadership at the Harvard Business School, it is found that

70% said they check their smartphone within an hour of getting up.
56% check their phone within an hour of going to sleep.
48% check over the weekend, including on Friday and Saturday nights.
51% check continuously during vacation.
44% said they would experience “a great deal of anxiety” if they lost their phone and couldn’t replace it for a week.