The new Google logo: just after the historic change made in the company

The Nobel Prize in Physics 2015 has been awarded to Takaaki Kajita in Japan and Arthur B. McDonald in Canada for their invaluable contribution in recognizing the Metamorphosis in the particle world. The scientists were awarded the prestigious Nobel Prize “for the discovery of neutrino oscillations, which shows that neutrinos have mass”. The scientists have discovered that neutrinos have the capabilities to change their identities. The metamorphosis is an implication of the fact that neutrinos have mass. The concept of neutrinos is a huge conundrum till now and their discovery has helped physicists to uncover the hidden enigma behind the neutrinos. 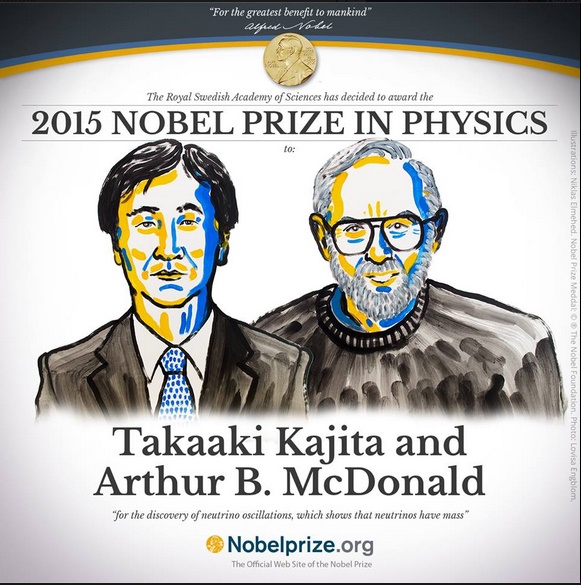 The universe has innumerable particles out of which the numbers of neutrinos is huge and physicists have found out that the number of neutrinos comes just after the number of photons. The neutrinos are found to continuously bombard the Earth. Neutrinos are created by nuclear reactions inside the sun and also by the reactions between the atmosphere of the earth and cosmic radiations. So neutrinos stream through human bodies every moment and you are in complete oblivion.

Takaaki Kajita presented the discovery that neutrinos from the atmosphere switch between two identities on their way to the Super-Kamiokande detector in Japan.

Meanwhile, the research group in Canada led by Arthur B. McDonald could demonstrate that the neutrinos from the Sun were not disappearing on their way to Earth. Instead they were captured with a different identity when arriving to the Sudbury Neutrino Observatory.

A neutrino puzzle that physicists had wrestled with for decades had been resolved. Compared to theoretical calculations of the number of neutrinos, up to two thirds of the neutrinos were missing in measurements performed on Earth. Now, the two experiments discovered that the neutrinos had changed identities.